“If a person sells ‘pakodas’ and takes home Rs 200 every evening, will it be considered employment or not?”, PM Modi said in an interview on Zee News. The statement of the PM created quite a buzz in the opposition parties as what he said implied that even selling Pakodas is a job.

In the aftermath, following such statement, politicians from all around India started a debate on social platforms about how can Modi ji advice the jobless, especially youth, to sell Pakodas. Not ony this, citizens majorily youth started to sell pakodas objectifying the promises of the government.

The Timeline following the Interview(Feb 19)-

January 29   On a question asked about employment in India, PM Narendra Modi resorted to a fact that a person selling chai and pakoda, who earns Rs 200 in order to feed his family, is considered employed.

January 23– In Ahemdabad, Patidar community leader Hardik Patel, lashed out at the PM, over his remark about whether a person earning Rs. 200 a day selling “pakodas” can be considered unemployed, saying only a “chaiwala” can advise youth without a job to sell the snack.

January 28– Senior Congress leader P Chidambaram took a dig on PM Narendra Modi through series of tweet, one stating that “Even selling pakodas is a ‘job’ said PM. By that logic, even begging is a job. Let’s count poor or disabled persons who are forced to beg for a living as ’employed’ people.”

5. Even selling pakodas is a ‘job’ said PM. By that logic, even begging is a job. Let’s count poor or disabled persons who are forced to beg for a living as ’employed’ people. 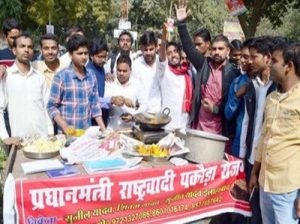 On same day, in Rajya Sabha, President of BJP, Amit Shah in his 77 minute speech gave a befitting reply to the fellow parties by saying that it is better to sell pakodas than staying jobless thus making a virtue of PM’s Statement.

February 07– Pondicherry Chief Minister V Narayanasamy sold pakodas for free showing his disagreement with PM Narendra Modi. He looked agitated with such remarks by the most important person of India. 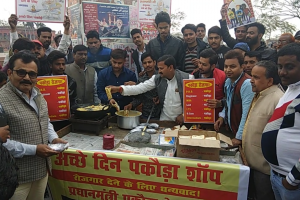 February 08– Shivsena’s spokesperson Sanjay Raut upset with the events happened in Kashmir said “Every day in Kashmir, the soldiers are being martyred, yesterday there was a bullet shot in the hospital and we are talking about Bhajia. If we did not take it seriously, then one day we would be sitting in Delhi to fry the pakora.”

When the Modi government came into power, it promised the people of India to increase the employment in all the sectors. They later promised 2 crore jobs, but there were hardly no opportunities for the youth.

Although, the remarks and the protest of the opposition parties namely congress can be said to as cheap politics, the fact that the BJP representatives are trying to hide their failure of providing jobs by saying that it is better to sell pakodas, than staying jobless, cannot be hidden for long. It raises a point that the professional degree holders that stay jobless in India are not the priority of the government. The government is actually clueless about creating jobs and so is hiding behind such statements. Last year, Reliance communications left out 3000 employees hanging in the dark. This added to the number of jobless in India.

Government may have done something for the rural sector by recruiting the labour class in the railway establishment but then what about the formal sector. What about funding the Small Medium Enterprises. What about investments in private market.

In this year’s budget, it has been noticed that there was a lot for farmer sector but nothing has been done for the common man. The topic of unemployment is always discussed but in context to the rural India, it seems like the urban India doesn’t exist.