In the first decade of the 21st Century, Fintech referred to computer technology applied to the back office of banks or trading companies. It was used as a portmanteau of financial technology for describing any emerging financial services sector. Now, the term has evolved to include any technological innovation in the financial sector, ranging from financial literacy and education, retail banking, investment to crypto-currencies like bitcoins.

In the current decade of the 21st Century, Fintech is being defined as a financial institution that makes use of technological innovation to perform multiple business tasks ranging from the creation of digital money to double-entry bookkeeping. With the internet revolution, followed by the mobile revolution, financial technology has grown massively alongside and therefore evolved to include a broad variety of technological interventions into personal and commercial finance.

Nowadays, in India especially, Fintech is a startup trend that is upsetting the structured format of traditional financial companies such as banks, mobile payments, money transfers and asset management. Moreover, in a world that is increasingly reliant on technology, it is only fair to say that the Fintech sector still has lots of growth potential ahead. Indeed, investors do realize the opportunities and market size of the Fintech sector. In 2008, global investment into the Fintech sector stood at around $900 million and this figure stood at $27 billion in 2017. 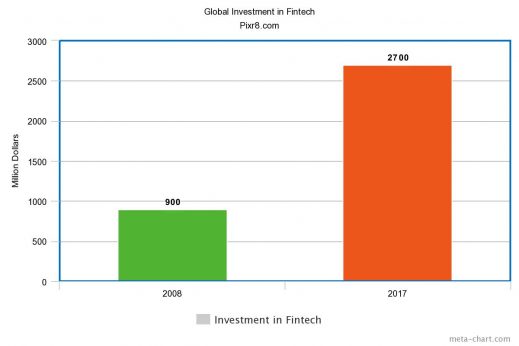 Global Investment in Fintech tripled in less than a decade

In 2015 alone, above 12,000 startups emerged in the Fintech sector globally. The industry is very much likely to keep growing in that upward trajectory and analysts and experts project the Fintech software and services sector to be worth $45 billion by 2020 at a Compound Annual Growth Rate (CAGR) of 7.1%. In India, experts predict the Fintech market to reach be worth $2.4 billion by 2020 which is double its worth of 2016 that stood at $1.2 billion. 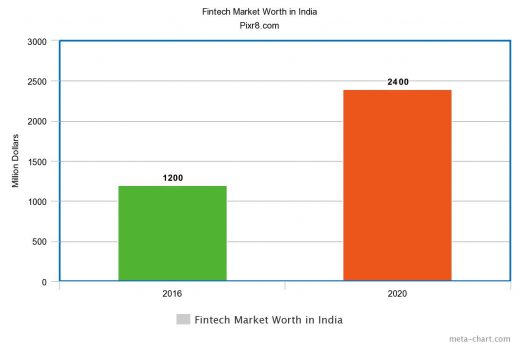 Fintech Market worth is expected to double coming 2020

The Indian economy is famous for being cash-driven and the Fintech sector took advantage of this market state to provide various options in a bid to engage individuals in relying on Non-Banking Financial Companies (NBFC) for services such as e-wallets, lending and insurance, etc…

India constitutes a flourishing market for Fintech companies, driven by a deep smartphone penetration surge that went from 53% in 2014 to 64% in 2018. The financial services market is also relatively open to be conquered as almost 40% of the population do not have a bank account and over 80% of money transactions are carried out in cash. Therefore, several Fintech startups can receive considerable market shares in the different sub-categories of the market.

There are lots of factors that contribute to the development of Fintech startup culture in India. First of all there’s the fast developing digital pace in India. For example, the number of internet users is set to cross the 500 million users milestone in June 2018 and stood at 481 million in December 2017 which represented an 11.34% increase over the December 2016 figure. 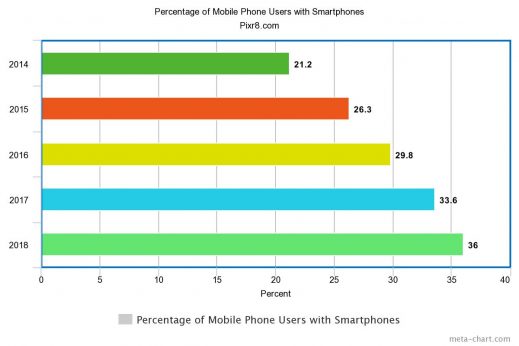 The number of smartphone users have been on a constant rise

Additionally, the government of India is also fiercely promoting a digital revolution in the country by proposing schemes such as ‘Digital India’ as well as promoting financial inclusions in schemes such as ‘Jan Dhan Yojana’ which aims in providing a bank account to every citizen. Opportunities also arise from the government’s bio-metric identification database, Aadhaar card which contains information from over 1 billion Indian citizens which can be used as a simplified verification step for customers.

The government is also pushing forward in facilitating the switch to digital financing services when the RBI came up with a new set of guidelines in 2014, which relaxed the rule of Know Your Customer (KYC) for customers carrying out transactions of Rs 20,000 monthly on digital platforms. Under this new law, customers can download e-wallets and use its services for ticket booking, bills payments without the need of producing official documents or photographs.

In April 2016, the government introduced a consultation paper that categorized peer-to-peer (P2P) lending platforms as NBFC. P2P is a form of crowd funding whereby loans are raised from groups of individuals that are set to be paid with interest. The platform sets the rate of interest or the borrower and lender can mutually agree upon a rate.

Funding in the Fintech Startup

Data shows that Fintech funding amounted to 21.47% of the country’s total startup funding rounds across every market during the first quarter of 2018, making it the industry most likely to receive any sort of funding in India. The market raised over $251 million of funding during 2018 Q1 period. 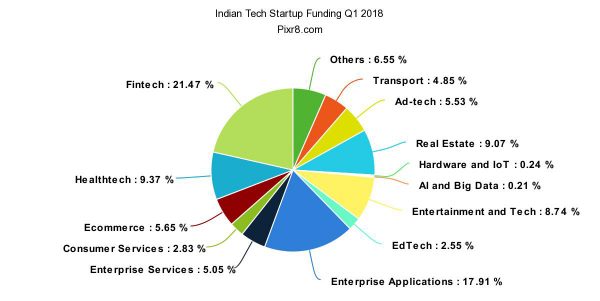 Fintech is the sector that attracted most funding in 2018

However, the ease of raising funds in the sector is also influenced by a significant burn rate, which is a matter of concern in a country where the sector is still emerging and therefore needs guidance. A study from Yes Bank which studied over 611 fintech companies including 123 overseas companies over the period of 3 months revealed that despite support from the government, low regulatory understanding remains a challenge for these startups. The survey found out that 74% of startups had a burn rate between $10,000 and $50,000 per year, meaning only 7% of the companies were actually profitable.