India based online e-commerce platform ShopClues revenues grow 60 percent this fiscal, while losses have been trimmed by almost 40 percent compared to the previous year as per the press release published by the company.

The Gurgaon-based company focusses on categories like fashion and strengthening position in tier III cities and beyond to push the growth. Shopclues will see the competition in this segment from the leading players like Flipkart and Amazon. Both leading online e-commerce players are also confident of hitting profits in the next 12-18 months.

The CEO of Shopclues Sanjay Sethi said, “2017 was spent ensuring that the company has the right revenue margins” without any discounting or heavy spending on warehousing adding to its costs. 2018 will be about continuing the growth. We became unit economic positive across all categories last year and we are looking at hitting profits in the coming fiscal”.

But Sanjay Sethi not declares the numbers on top and bottom line as these numbers are still being audited. According to Sethi the company’s revenue have grown about 60 percent, while losses have come down by about 40 percent.

ShopClues revenue from operations was at Rs 180.3 crore in 2016-17, against Rs 161.4 crore in the preceding fiscal, according to documents filed by the company with the Corporate Affairs Ministry. 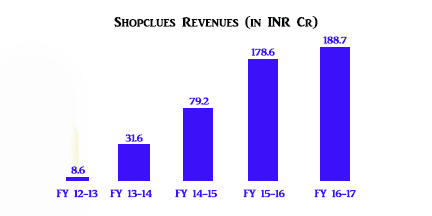 “We are like the local bazaar. Our customers are cost-conscious. They are definitely ambitious and want the big brands but a significant part of their purchases are still done through places like local markets,” Sethi explained.

He added that about 80% of the company’s orders come from tier III cities and beyond from places like Haflong, Palai, Chatrapur etc and that these customers are also buying more frequently 20% more as compared to those in metros.

When asked about the competition against big players like Flipkart and Amazon, ShopClues co-founder and Chief Business Officer Radhika Ghai said there is enough room in the market for multiple players to grow.

“Everyone thought shopping malls will kill big markets like Sarojini Nagar in Delhi. But that hasn’t happened. People through both of these locations and are buying. Same is the case with us and our competitors,” she said.

Ghai added that the ShopClues till date raised about $200 million and on track to hit profits, which shows that its “business model is working well”. She pointed that the e-commerce market in India is underpenetrated at about 2 percent of the multi-billion dollar retail industry in India and there is room for all the players to grow their business.