Tesla has increased its production rate of electric cars in the first quarter of 2018 as new data reveals that the company has presently produced over 35,000 new vehicles. This production amount in 4 months represent a 34% increase compared to their previous record of 25,700 cars produced in Q2 2017.

This chart from Pixr8 News indicates that Tesla’s production of car since Q3 2016 is on inconsistent in almost every quarter. Usually, the carmaker company produces approximately 25,000 cars per quarter since Q3 2016 and the 35,000 mark is a noteworthy milestone for Tesla. 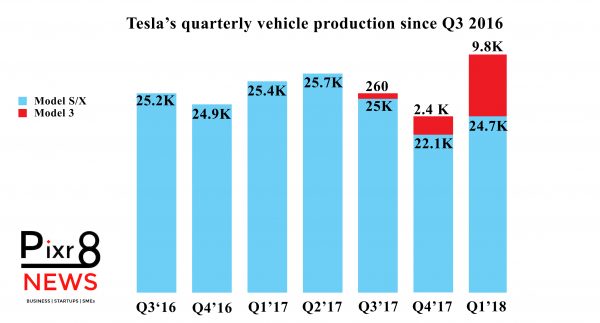 Unfortunately, a report emerged today indicating that the company’s Fremont factory ground vehicle production came to a standstill, at least momentarily, on Tuesday morning due to a fire that spread out in Tesla’s paint shop. Two employees of Tesla shared the news to an American media website.

“On Tuesday morning, there was a small fire in the factory that was immediately contained and extinguished in a matter of seconds. There were no injuries and vehicle production was up and running normally shortly thereafter.”

Tesla is on a mission to make electric vehicles the new requirement in terms of automobiles and their rise in car production these last 4 months reveal its desire to ramp up the production of their car models to meet the increasing public demand. Yet, the bounce in production still meant that the company missed its first quarter targets especially for the Model 3s. Indeed, Tesla was targeting making at least 2,500 Model 3s every week until the end of the first quarter 2018 but the best they could make was 2,020 Model 3s during the week starting March 27 to April 3. Unfortunately, Tesla produced only 9,766 Model 3s, which averages to 800 car produced every week for the last quarter, way behind their target.

Last summer, when the Model 3s was launched, CEO Elon Musk did warn his factory workers that they had to manufacture their cars quicker and meet the massive demands and expectations of the car. A year later, it’s quite clear that Musk did not overcome all his doubts and worries but he is at least heading in the right direction.

To overcome the company’s production rate issue, Musk even spent a lot of his time at the Fremont factory, to the point of sleeping there. Tesla has a proven record of failing in reaching production targets.

About a year ago, I asked Doug to manage both engineering & production. He agreed that Tesla needed eng & prod better aligned, so we don’t design cars that are crazy hard to build. Right now, tho, better to divide & conquer, so I’m back to sleeping at factory. Car biz is hell …

Elon Musk’s Tesla is targeting producing 5,000 Model 3s until the end of the next quarter and to make this possible, the Fremont, California factory was briefly closed to upgrade their equipment. And it is primordial for Tesla to meet these targets since around 450,000 people already pre-ordered the car model, and not meeting production targets might pave the way for Tesla’s descend to hell especially since the company is not yet profitable.