In Apple’s last year annual fall event the excitement was around the new Live Photos or 3D Touch to move smartphone users into stores to purchase the new iPhone 6S or 6S+.

But for many, the iPhone is financially out of reach. Around the world, Android devices cost half that of iPhones on average—$687 for the iPhone and $254 for an Android. In emerging markets especially, iPhones are simply not a financial possibility.

We took a look at the average retail cost of Apple’s iPhone (specifically, an unlocked iPhone 6 model) and Android devices in five key markets—Brazil, India, Indonesia, China, and South Africa—and the United States. The outcome was not all that surprising. In all markets, Apple was more expensive than Android devices, sometimes at a rate of 3x or 4x more. 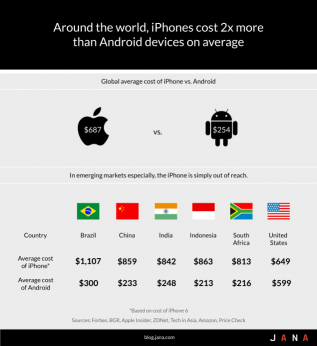 Thanks to the country’s 60% tax on all imported retail goods, iPhones sold in Brazil are considered the most expensive smartphones in the world. In South Africa, India, and China, the iPhone is triple the cost of Android. In the United States, the cost difference is only $50, but Android still sells more devices.

In all six countries we looked at, Android has more market share than Apple, mainly because the high cost of iPhones makes them out of reach for a majority of smartphone users. In the United States, the cost is not as much of a barrier, but Android still leads the market at 53% compared to 41% for Apple. 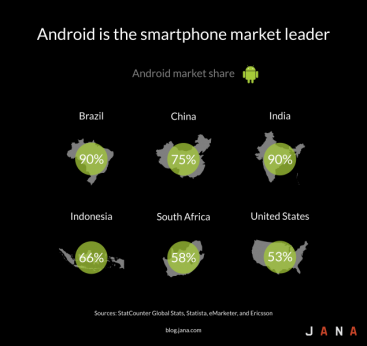 A huge reason that Android is leading the market is the availability of affordable Android devices. In India, a country where Android has the highest market share, a user can get a device for as low as $30. While Apple only offers one type of smartphone, there are 1,300 brands that are selling Android smartphones. The more diversity of devices running the Android OS, the more choices—and ultimately—the more affordable those choices are. If a smartphone is available for purchase at 28x less than an iPhone, it makes the user’s choice between the two devices simple.

The iPhone’s high cost prohibits it from overcoming Android’s market share, especially in emerging markets where many can’t even afford the data needed to use these devices. Until the cost of an iPhone drops, users in emerging markets will keep saying “No thanks” to Apple and “Yes” to Android.