The quarterly profit results for the most crucial quarter of Apple are out, and those are outstanding!

Breaking its own record which was set 2 years ago, Apple posted a revenue of $88.3 billion and net quarterly profit of $20.1 billion. The results come after the launch of its $999 surprise phone- iPhoneX which was launched in November, along with the expected iPhone 8.

“iPhone X surpassed our expectations and has been our top selling iPhone every week since it shipped in November,” Cook said.

iPhone X introduced a new feature called Face ID which was its stand out feature along with amazing selfie camera. As per the release, Apple sold over 77.3 million iPhone and over 13 million iPad. It generated a total of $88.29 million revenue, thanks to the higher prices of its new handsets. 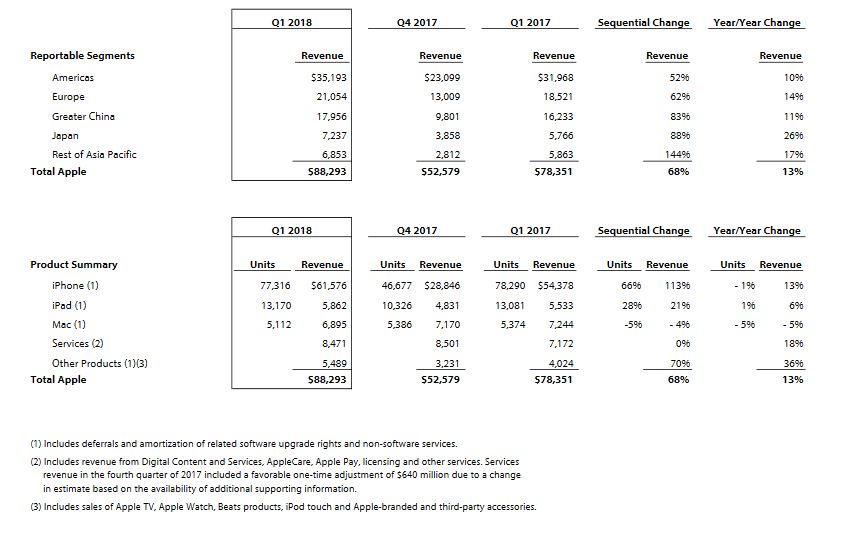 Shares initially fell in after-hours trading as Apple disappointed investors with its guidance for the next quarter, but rebounded soon after. The company expected revenues of between $60 billion and $62 billion, below expectations.

“We’re thrilled to report the biggest quarter in Apple’s history, with broad-based growth that included the highest revenue ever from a new iPhone lineup,”  Cook said.

While the numbers of iPhone sales did not break the record that was created in 2015, the sales crossed the last year’s mark. Have a look at the history of iPhone sales:

Apple is the world’s biggest company which is also expected to be the first one to touch the one-trillion-dollar value mark. However, its new iPhone X was launched with iPhone 8, it was over-shadowed by the bigger phone, boasting Face ID and no-home button.

Talking about the decline in iPhone sales, the company said that it was mainly due to the fact that the quarter was a week shorter than last year.